Every once in a while I like to take a look at portable keyboards, which have great value in extending the usability of tablets in particular and mobile phones. The challenge for professional writers is that a keyboard may be one of the most important devices in the toolbox, and just having something portable that can be used for typing notes or emails isn’t good enough. Ideally, you should be able to type at length, for hours at a time if necessary. But portable keyboards, by their very nature, are small creatures. I came across one that most definitely fits in the very small category—and tends to be actually usable.

Plus a bonus look at a product you probably wouldn’t expect to find here, but might be worth checking out if you work on location much.

The challenge with portable keyboards is making them small enough to comfortably take with you away from home—yet large enough to do real-world typing at length. I’ve come across a few that I’ve liked over the years. Logitech has two of them, both reasonably full-sized with a very good typing feel—the K380 is particularly nice and small, though it’s a bit thick and has no “slot” for inserting the tablet or phone. Their K480 does have a slot, and is fairly thin, though a bit on the long and wide side.

Which brings us to another Logitech model, the Keys-To-Go. This is incredibly thin and light, and joyously portable—sort of a cousin to the keyboard Microsoft sells with its Surface tablet. It has a lot of great things about it, though also some caveats.

The best thing is that aforementioned size and weight. Its portability leaps out, something easy to drop into a briefcase or backpack, and it even fits in your back pocket. In fact, you could stick it between pages of a book if that’s all you’re carrying around. (And if it’s a hardcover book, it would come close to fitting inside without even noticing it’s there.) The feel of the typing was quite good for something so thin, just ¼” thin, although typing feel is of course very personal. I only had a little bit of trouble with the space bar, since it required a bit more pressure than I’m used to when I type at my desktop or on my laptop—though I suspect that’s the sort of thing one might adjust to after you’d used it for a while. It also has a strong battery life, rated at up to three months with extensive typing. And there’s a spill-proof covering to it all, which has a comfortable feel. Also, it connected very easily and instantly to my tablet’s Bluetooth each time I turned the keyboard on, something I don’t find consistent among all devices. 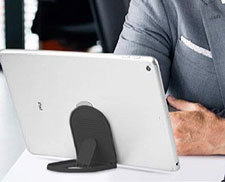 There is one small quibble, and a notable hurdle. The quibble is that there’s no built-in slot to insert a tablet. To be clear, Logitech does very thoughtfully include a small, attachable stand. And the stand works great with a mobile phone—or with a small tablet if the tablet is in horizontal position and attached to the keyboard for ballast. But for a tablet in vertical mode (or if you want a little distance between the keyboard and stand), it wouldn’t suffice. Also, in a perfect world, I prefer a built-in slot since it’s one less small piece that can be lost. Because the Keys-To-Go is so thin, however, a built-in slot wouldn’t be possible. And to be fair, such things would make the keyboard slightly deeper.

This quibble is profoundly easy to resolve—especially since it may not even be a quibble to some people, given there’s the included stand. For me, the workaround is that I have a foldable stand from Amaforest that’s so unobtrusively thin and light you could put it in your shirt pocket. (A pack of three is just $7.50, which you can find it online here.)

The hurdle is a trickier matter. Although the Keys-To-Go keyboard is a respectable size, it’s not full-sized. It actually does have surprisingly good keys for something so small, but if your fingers are large or especially chubby it would definitely be cramped. The shame is that it’s only 1.5-inches smaller than the other two Logitech portable keyboards I noted above, and if they’d made this the same size, it would have been near ideal. (And making it slightly longer wouldn’t affect its width for fitting in one’s back pocket.) As it is, while most people could use this to type for a few hours, it would probably get very tiring. It’s best—indeed excellent—for notes and emails. What it’s also excellent for (like what brought this up when I was wandering the halls at the Consumer Electronics Show for eight hours back in January) is if you have to carry equipment around in your briefcase for a long period of time. Every ounce counts. And this is only a mere six of those ounces, impressively light.

(A small note: the included Start-Up information sheet is insidiously terrible, unless you like deciphering pictographs. However, the link to an online guide is excellent and resolves all that.)

So, there is a great deal I like a lot about the Logitech Keys-To-Go. And little that’s wrong. It’s just that what isn’t ideal is too important and keeps it from being my portable keyboard of choice for serious work on a tablet. But under certain, important circumstances, it would be what I’d go to. At the time of writing, it sells online for $41 for an Android/Windows model and $48 for the Apple version.

TOM & SHERI’S IRON IN A BOTTLE 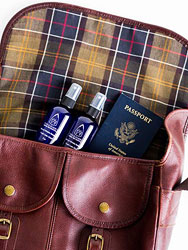 This isn’t remotely the sort of item you’d expect to see here, since it isn’t tech, but fabric-related. But since the mission for this column is products of interest to writers or those in the entertainment field when they work either at a home office or on the road, it passes the test. Iron in a Bottle is a spray that’s sold as an alternative for people who hate ironing (which is most people). Spritz it on your wrinkled shirt, dress or pants, give them a shake and then sort of rub it in briefly, and the wrinkles disappear.

I’ve only done cursory tests, but it seems to do what it promises reasonably well. There’s a liquid splotch left behind (at least when I do it…), though it evaporates fairly soon. Know that there are no chemicals: it’s made of purified water, a plant-based surfactant, natural “quality control agents,” and has light linen fragrance. 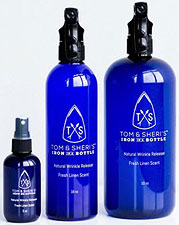 The spray is definitely easier to use than ironing. And it’s easier too than using a steamer—though it’s not all that much easier, and a steamer only requires refilling with free tap water. It’s not overly expensive, especially considering the saving of time, but not as cheap as free water. Where I personally think it is most valuable (and the point of including it here) is the small travel-size bottle to take on the road in your suitcase.

Iron in a Bottle comes in three sizes. The 3 oz. travel size is $7. A 16 oz. bottle costs $18. And the 32 oz. economy size is $28. However you can save more by purchasing one of their two combo packs. For that matter, I would imagine you can save too by just always buying the large size to refill either of the smaller Iron in a Bottles—or fill any spray bottle you may have around the house. (Note that there’s an advantage to using a larger sprayer for regular home use than the small travel bottle, since the spray from a large bottle covers a wider area.)