Unfortunately, being a prototype, the device wasn’t available yet for the market or review. Over the next months, I kept checking for its release, but things got pushed back. Well, at last, huzzah! The long wait is over, and the product has hit the market. And finally we get to dive in and take a look. 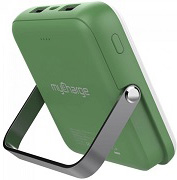 The Power Lumens 10K falls under the “Adventure” line of myCharge products. At heart (and bear with me, because the device transcends this), it is a portable charger. Small and reasonably light but packing a lot of power—10,000 mAh will charge an Android mobile phone about six times and give maybe five 5 charges to an iPhone. (Know that myCharge has plans to release a 20K version, but there is no date yet for it). The device is square-shaped only a touch over 3.5” x 3.5” (which can fit into pants pocket) and weighs just eight ounces. There are two, standard USB-A slots at 2.4 amps, so you can charge a tablet or two smaller devices at the same time. There’s no built-in cable, though as much as I prefer them I didn’t expect it to be the case here, and many chargers today are getting away from that.

That’s what it is as a charger. Nice, a lot of power, small, light, an uncommon square form factor, nothing overwhelmingly standout as a charger, though quite good. But—

What separates the Power Lumens 10K from almost all other chargers and what caught my eye back at CES is referenced by that word in the product’s name—“Lumens.” Because the device is also a lamp—and not just a lamp, but a stunningly bright one with four settings, plus an SOS capability and incredibly long-life, which is of tremendous value during a power failure. In fact, I’d say that the lighting capability is so strong that, rather than being a perfectly respectable, solid, normal charger first, I see this more as a lamp that also can serve as a charger. 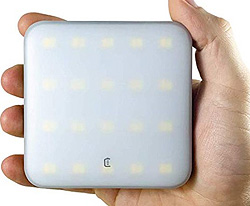 There are four light settings. The highest is just phenomenally, shield-your-eyes bright. Brighter than you probably will ever need, but if you want to brighten a room and have a flood light for tailgating at night, this will do it. In fact, the lowest setting is bright enough on its own that it should suffice for most people, most of the time—and it gives you the most-significant running time, which is critical if you’re on a camping trip. (I was going to also say, “…during a blackout,” except that even at the highest setting it’s rated to run for nine full hours, which is longer than most blackouts.)

Further, if you don’t like the harshness of bright white light, a long-hold of the power button when the light is on will toggle the device to soft yellow.

And a long-hold of the power button when the device is off will turn on a flashing SOS light.

Very nice, too, is that there is a metal kickstand that folds away when not in use, but can be slid out to conveniently set up the device.

As good as it is to have the option of four brightness levels, I’m not sure if they’re necessary. I didn’t find there to be that significant a difference between each level (and especially for the middle two), and myCharge probably could have gotten by with two levels. It’s certainly not at all a negative to have more options, though it does mean more toggling through the levels to get from the top level to the lowest and not always being sure what level you’re on without going through the full cycle. 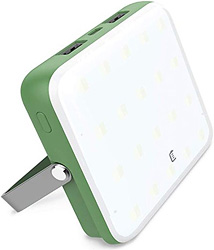 As I said, I like built-in cables, but I didn’t expect that here, and not having one built in it does give you a bit more versatility in the choice of what cable you want to use. The device comes with a small, thin micro-USB cable for charging the device, though I prefer one of the longer, more substantial ones I have around the house, as do most people, I suspect, which gives a bit more flexibility on where to place the device when charging it.

When you press the power button, a row of four lights shine to let you know how much power is left. It took about a second to go on, which of course is not remotely a problem, though most such-lights go on instantly, so at first I thought the power lights weren’t working.

As far as I can tell, the Power Lumens 10K is not officially a “Fast Charger,” though its rating makes it very fast, and fast enough for most people other than the Terminally Impatient.

Like all myCharge products I’ve tested over the years, the device is extremely well-made. Very solid, particularly the kickstand, and it has a very simple, almost graceful design.

I don’t think that I’d pick the Power Lumens 10K to be my go-to pocket charger for my mobile phone. It has more power than needed, and the square, thickish form factor (though it slips easily into a pocket) isn’t the best for charging and using a phone at the same time. But I doubt that this is it’s intent, falling under the “Adventure” umbrella for myCharge. Where it’s best-suited is for back-up lighting and power during a blackout, camping (thanks not only to its lamp but light-size), backyard and tailgating use. And I wouldn’t hesitate to toss it into a suitcase for travel backup.

At the time of writing, the Power Lumens 10K can be found online for $60. That’s more than you can pay for a good, basic portable charger for a mobile phone—but this is not that. This is so versatile in many other ways that have their own importance, and does it all wonderfully, for a respectable price. Again, to repeat, myCharge has plans to release a 20K version, but there is not yet a date for it.

The myCharge Adventure Power Lumens 10K happily lived up to my expectations from when I saw the prototype. What it is, it does superbly—the brightness of the light and up to 41 hours of power make this valuable enough alone to me without even the charging capability. Put the two together, and it’s a terrific device.