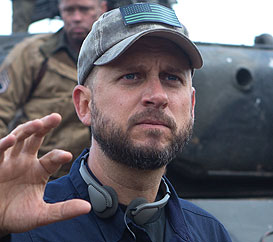 As writers, we're always accused of trying to fix the past or something or trying to solve some problem from our personal lives.

“You don’t choose your family,” South African civil rights activist Desmond Tutu once famously said. “They are God’s gift to you, as you are to them.” David Ayer, the 46-year old writer, producer, and director of Fury—about a tank-bound battlefield brethren bonded, ravaged and savage, in combat during the final days of World War II—couldn’t agree more, especially when it comes to the makeshift families forged in military service. “Fury is about these characters, this family, this dysfunctional family, that has to work together in this horrible, horrible situation,” says Ayer, who crashed the Hollywood scene a decade ago with his much-praised spec script, Training Day, followed by Dark Blue, SWAT, and the critically acclaimed End of Watch. “But Fury is about family. It’s that thing of: nobody can hurt you more than your family, the ones who know you best. And you get to know guys pretty well when you’re all stuck in a tank for weeks at a time. There’s no escape.”

Spoiler alert: the body count in Fury, which stars Brad Pitt, Shia LeBeouf, and Logan Lerman, is decidedly (okay, exponentially) higher than in, say, The Royal Tenenbaums, Flirting with Disaster, or August: Osage County, other cinematic works about familial fractures, but Ayer’s deeply felt, heavily researched screenplay expertly captures the brutality and nobility that often simultaneously define fraternal relations, while proffering an uncompromising look at the barbarism, terror, and valor of life during wartime. “When I first told people I was going to make a World War II movie, a lot of them kind of groaned, and said, ‘Really?’” laughs Ayer, who served a stint aboard a submarine in the U.S. Navy after a rough and tumble adolescence in South Central Los Angeles. “But I thought if I talked to enough war veterans and read enough memoirs and Army after action reports and war diaries and really dug in on the research, maybe I could reinvent the genre a little bit and show the war through their eyes. I didn’t want to make everyone else’s World War II movie. I wanted to make mine.”

Fury explores many of the themes that have been central to your body of work, specifically the tense, combustible relationships between orphans, lost boys, and young men with complicated daddy issues, who come of age in mortal jeopardy and, usually, with great suffering.

Exactly. As writers, we're always accused of trying to fix the past or something or trying to solve some problem from our personal lives. I don’t know if I’d argue that or not.

That’s just to say that, regardless of genre, your writing also feels very personal a lot of the time.

Well, with Fury, both of my grandfathers fought in the war and were career military, my uncle fought in World War II, so it's all part of my family history. They went to war, they came home, and whatever it was they experienced over there, it was incredibly mysterious because nobody discussed it, nobody ever talked about what happened. Nobody in my family knew what they’d gone through until I actually got a hold their military records. It wasn’t just my grandfathers who stayed silent about their experiences. It was a whole generation of men. They just didn’t discuss it. That left a shadow over our nation’s history even today; they brought the war home, and they raised the Baby Boomers. I wanted to know what that was all about.

Was that the genesis of Fury, looking into your family history?

That's what got me into the history of the war. For all of the stories that have been told about American soldiers in World War II in books and movies and stuff, what most of us really know is: the Japanese bomb Pearl Harbor, and we save Private Ryan, and then a sailor kisses a nurse, and then it’s all over. But there's all this other nasty business that happened in between, especially at the end of the war where the Germans refused to surrender and threw the rulebook out of the window. So there are these morally hazardous situations that our soldiers faced where there are women and children coming at you with rockets and all sorts of dirty pool, where the S.S. would surrender under a white flag and then have a machine gun strapped to their back and drop down and start lighting up the American troops there to receive them. These are many of the same moral hazards our guys face today overseas, the same sort of fanaticism. There's nothing new under the sun.

The parallels are evident for sure, without being heavy-handed. We’re doomed to repeat history, or so we’ve been told.

One of the most unique things about Fury is that much of the film is set inside of a tank called Fury, as Wolfgang Petersen’s Das Boot was largely submarine-bound. What was the fascination for you?

This armor, the armor on those tanks, was so crucial to winning the war and yet there had never been the great Hollywood tank movie, and it just seemed like, “Wait a second…” I had to go back and look at all of these old World War II movies and really think about it. Hadn’t been done. It was kind of a forehead swat moment for me.

The tank is a potent metaphor, of course, for the armor these soldiers used to protect themselves in myriad ways, but it’s also a womb of sorts for these young men and, too often, a coffin as well.

Exactly. The tank is a character in this film, and it's one of the first things we see, and it’s the last thing we see, and it's really present throughout the entire film. It's their living room, it's their office, it's, unfortunately, their bathroom at times. You really grow to love the Fury over the course of the film, the same way my actors did when we were shooting the film. I mean those guys loved that thing. You couldn't get Brad out of it. Even when we weren’t shooting, Brad was inside that thing.

Though Fury resonates with many of your recurring themes, from a stylistic standpoint, it couldn’t be more different than your last film, End of Watch. Is that a difference that’s evident on the page, or are those directorial choices?

It’s interesting because when I write, I have to be a writer. That’s the whole thing. I’m a writer. I started out as a writer, and I'm still a writer, and it's who I am, and it's how I come at everything. Then I'm a director, second. The writer knows that he’s writing for a director, but the job is always to write the most amazing script that I can. The director can worry about everything else later. Sometimes the director is me!

So is what audiences see on screen what a reader would see on the page?

It's pretty much all in the script. With me, if it's not on the page, it's not on the stage. You can't really make this stuff up as you go on the set. My scripts tend to be very detailed, and the trick to good writing is knowing what not to put in, not getting bogged down in detail, but still creating the sense of the world and the feeling.

Through the years, you’ve done several doctoring jobs for the studios. How does that impact your creative process?

That’s a great question! I've done so much work for the studios that you internalize the development notes you get, and the ones you figure you’re going to get. It’s like I have my own inner D-Girl commenting as I write, and I sometimes have to just shut that voice up and write the script from me. With Fury, that voice was actually kind of useful to me, though. I started writing it and got about 45 pages in, and I started hearing the voice and it was, like, “Oh gosh, this is every other World War II movie.” That’s not what I wanted to do, so I threw it all out and started over. Overall, though, work for hire stuff is night and day from when I’m doing my own thing.

How did you get started as a writer?

I knew I wanted to tell stories. I knew I wanted to write movies. I felt like I had stories to tell that were worth telling. I met the writer Wesley [Cape Fear] Strick, and he read some of the stuff I’d been working on, and he really encouraged me to keep going. You know, I’m a high school dropout and most of what I was writing back then was crap, but with a little encouragement, it sort of made sense to keep going. I figured at that point it was worth throwing out everything I thought I should be writing, the things I thought people wanted to read and turn into movies, and just write a story that I would love. That’s how Training Day happened.

So the advice for up and coming writers is: please yourself? That’s simultaneously the best and worst advice a writer could receive?

I know. Exactly! But it’s actually useful if you think about it. It’s useful to learn how to paint by numbers as a writer, to try to write the thing you think is going to please people. You get a sense of structure. You get a sense of how to build a scene, how to build a storyline, when to get in and out of a scene, how to weave characters together in meaningful ways in 120 pages. You can write a lot of bad scripts, but still learn all the rules of screenwriting. I believe you really have to know the rules before you can break them.