This month, we look at a couple of especially portable items. I hesitated to use “especially” to describe both, since one is a little bulky—but given what it provides in such a small package, I figured that the designation fits.

X-Mini has long been one of my favorite companies. In part because they make wonderful, innovative and very small, portable speakers of high quality. And in part, because I came upon them by accident at CES seven years ago when they were trying to break into the U.S. market but hidden away with other Singapore businesses in some distant convention hall nook, and it’s been great to see their growth. Oh, okay, and in part because they have one of the most joyous CEOs on the planet, Ryan Lee. I was going to say “Planet Earth,” but realized I couldn’t guarantee the “Earth” part.

They’ve started branching out in recent years, with larger speakers, headphones and other intriguing designs, but they’ve kept the core sense of innovation and quality. The company began life developing these tiny speakers about the size of a golf ball—often copied over the years. The sound was always crisp and the quality impressive. This new speaker, the Xoundbar, keeps “small” in the equation, but shifts to a totally different look.

The Xoundbar is about the size of a narrow 3 Musketeers candy bar. It’s beautifully designed, elegant and sleek, and solidly constructed, fitting easily into a shirt pocket, weighing in at just 4.5 ounces.

There are four buttons on the top. On/Off, Power-Pause, and two volume controls (which also can shift you through music selections). The marking on them is much too tiny, but after the first time when you figure out where they are, it’s hardly a challenge using them after that.

The On/Off button doubles for connecting to your music device via Bluetooth, and this had one of the easiest Bluetooth pairings I’ve had to set up. The Power-Pause button is also what you use for accessing phone calls. There’s an intriguing feature, as well (which I wasn’t able to test) where if you have two Xoundbars, you can connect them wirelessly to create stereo. 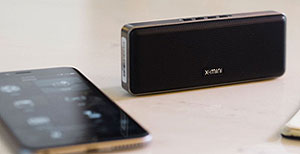 The sound quality for something this tiny is impressive, extremely crisp and clear—though it’s noticeably better on the treble end. There wasn’t as much bass as I’d prefer, though your mileage may vary. My “golf-ball” X-mini Kai 2 has a richer, warmer sound overall, though the Xoundbar put out significantly louder volume, in fact remarkably so. And it was excellent listening to straight speech (like play-by-play to the Chicago Cubs game…).

If I had one personal issue it’s that there’s no way to connect the Xoundbar directly to your music source with a wire, it’s Bluetooth only. That’s not problematic, and no matter at all if you prefer a wireless connection, which is the growing way of the world (especially for iPhone users). But with Bluetooth there’s always going to be a degradation of sound because the data is compressed. That quality factor has lessened over the years, but it’s still there, and I like to have the option.

I couldn’t say if I prefer X-mini’s new Xoundbar to its traditional “golf-ball” Kai 2. I like them both, but in different ways. If you’re looking for size and portability, the Xoundbar is probably the way to go…even as small as the Kai is. The Xoundbar is just designed wonderfully efficiently. It also has notably louder sound, though with less bass and no wired connection. It also costs less, retailing at $40.

As I think should be clear by now, I love portable chargers. There are basically two types—the smaller devices that can fit in a pocket, and those that hold more capacity which are likely to be carried in an attaché or suitcase. Both types have continually gone through interesting design changes over the years (which is one of the reasons I like portable chargers so much, devices that seem to be so simple and basic on the surface but are far more multi-functional than people realize), but it’s the larger devices that have made the most significant changes. And that’s where the AdventureUltra comes in from myCharge, another favorite, one of the two best portable power companies I’ve come across, which tends to build smart, innovative, well-designed, and solidly constructed products. 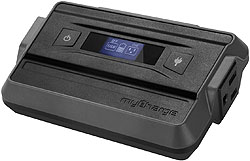 There are two notable changes with all these larger-capacity chargers (myCharge and otherwise). The first revolves around size. Because they hold more capacity, these chargers are substantially bigger and heavier than the pocket units. The AdventureUltra, for instance, is 13,400 mAh (milliamperes) which is very good, solid capacity for extended use, though still not on the high end. (The somewhat similar ChargeTech that I reviewed earlier in the year is double the capacity at a whopping 27,000 mAh.)

You can certainly use a larger device to charge a mobile phone, though you aren’t going to carry a big charger like these around with you for daily on-the-good needs. You’re more likely to pack it away for a vacation, overnight trip or perhaps even camping. And more often than not, use it to also charge a tablet, or a device that requires more power. But, yes, of course you can use them for charging your phone, too, just more generally at night, I’d think. 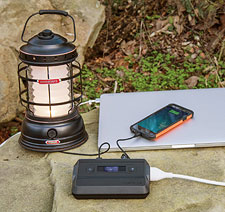 The first of these notable changes over the years is that, even though larger, they’ve come down in size. The AdventureUltra is only a pound—and yes, that’s a lot for a daily portable charger, but not for something this high-capacity. And it’s compact, just about 4x5-1/2x1, just slightly more than two decks of cards side by side. For what it is, it’s highly portable. (Again for comparison, the aforementioned ChargeTech is 1-1/2 pounds, impressive for its double capacity, though, definitely heftier, in both weight and size.)

But it’s the second change that’s most important. And that’s how some of these new, large capacity chargers—like this AdventureUltra—now come with an AC/DC outlet. With a power output of 45 watts, that means you can not only plug in a laptop computer to recharge it (giving you plenty of power on even an international flight), but also run any small home appliance wherever you are! No need for having a bulky, heavy generator—or go without. It can run a 42-inch TV for up to three hours. Or run a fan, lantern, or even a blender or toaster oven (for instance, if you’re tailgating). Or recharge your drone’s battery. Well, you get the idea. All from this little, portable charger. 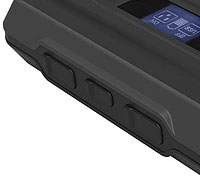 The AdventureUltra additionally has three USB ports—two for standard USB plugs, and one for the new USB-C, which is becoming the standard. When you use these, you just tap the Power switch. When using the AC sockets, you tap the AC button. A bright LED display shows you the charge you have left in the device.

It works very well. Depending on what you’re charging and its power draw, you can charge several devices at the same time. Know that you won’t get as much power as you would when plugging it into a wall socket. For instance, although my room fan ran well when plugged into the AdentureUltra, it didn’t have the same airflow as when connected to the wall. But your devices will run. Wherever you are.

I like the AdventureUltra a great deal, and have been looking for something this small, light and portable that has an AC/DC capability for a long time. (Others exist, but they’re bigger and heavier, like that ChargeTech.) But I do have a few small quibbles.

The first is that in a perfect world, I’ve grown to love built-in cables, so my wish list would have been to have a micro-USB cord built in, to use with a mobile phone. But that’s just me, dreaming. I don’t know of any large charger that has built-in cables. So, instead, you simply plug in a micro-USB cable to charge your phone.

The second is that each socket has a flimsy plastic covering. If you’re careful popping them off, then you should be fine. But given that this device is so handy for camping, I suspect that handling it “dainty” is not a byword, and it would be easy for these to snap off. On the positive side, the covers are connected to the charger which means as long as you’re careful you don’t have to worry about losing them.

The final isn’t really a quibble. Just a preference in that same perfect world and an observation about all larger chargers. Being larger, with more battery capacity, these kinds of chargers—all of them—require a proprietary charger. You can’t use a micro-USB cord connected to a wall outlet hub, it just doesn’t put out enough power to make re-charging the charger itself realistic. I don’t love having to rely on proprietary chargers since you’re stuck if they break or are lost. But that’s the way it goes for all these devices. (Okay, related to this, I do have one thing to add to my wish list for the next generation—as long as we need to have proprietary chargers, I have grown to love wall plugs whose prongs fold down. It makes them much more portable.)

But all in all, the myCharge AdventureUltra is a terrific charger. With the built-in AC socket, it’s a new field, and others like it are hitting the marketplace, but at the moment it’s probably my favorite. Know that if you have more extensive power needs, the 27,000 mAh ChargeTech will likely suit you better, but it’s definitely bigger, heavier and more expensive. The AdventureUltra hits the sweet spot on all over levels, which makes it such a good compromise.