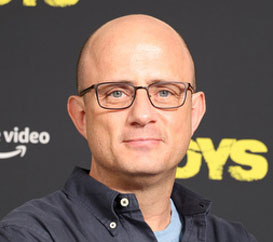 If the show has any theme it’s if anyone stands in front of you and says, ‘I’m the only one that can save you,’ do not trust them. They are selling you something, and no one is coming to save you. So we all better figure out how to save each other.

If you’ve seen Prime Video’s Writers Guild Award-nominated, stridently TV-MA hit The Boys—based on Garth Ennis and Darick Robertson’s beloved, hard-R comic—nothing much is shocking. If you haven’t, one of the last scenes in season two will give you the gist: the show’s lead character, Homelander—a blond Adonis of a superhero played with narcissistic zeal by Antony Starr—stands astride a skyscraper, engaging in an unmentionable act of self-service while repeating to no one in particular, “I can do whatever I f****** want!”

The series, which is Prime Video’s most successful ever, tells the ludicrously violent, sexually rapacious tale of a group of superpowered individuals called The Seven, led by Homelander and marketed and monetized by global corporation Vought International to an adoring, woefully ill-informed public. Billy Butcher (Karl Urban) leads The Boys, a black ops team of antihero protagonists who strive to check and even liquidate members of Vought and The Seven when they go too far. Capes, violence, and sex aside, the success of the show comes, in no small part, because showrunner Eric Kripke (Supernatural) understood from the jump that the characters, not their superpowers, were the hinge upon which the show would swing. Even more fundamentally, Kripke got that the core engine of the story was the question of how real people would actually behave if endowed with superpowers?

The answer, it appears, is at the top of that skyscraper.

And Homelander’s high rise scene was just a warm up for season three, which bowed June 3 and not only features the further dissociative unraveling of Homelander and the introduction of a new rival, Soldier Boy (Jensen Ackles)—who’s just out of storage and super grumpy—but also an event from the comic known as Herogasm—that puts Homelander’s solo act on the dustbin of debaucheries past.

Kripke spoke with the Writers Guild of America West website about adapting the R-rated comic for the small screen and how, what began for his writers’ room as “taking the piss out of superheroes” almost immediately became a satirical commentary about modern political life in America, Donald Trump, Fox News, and what he calls, “the intersection of celebrity and authoritarianism.”

This show brings America's obsession with superheroes back to its Bacchanalian Greco-Roman roots where the Gods are petty, vain, and let’s just say very sexually active. How much was the sort of Greek ethos even a thing at the beginning of this show for you?

It’s a fascinating question. The short answer is, we didn’t start there at all. We kind of evolved to it once we started talking more and more about who the characters were. A certain amount of it was inspired by what Garth Ennis was doing in the comic, although the comic is a little more stylized. But our overall goal was [figuring out] how we make the most realistic superhero show ever made? How do we completely live in the thought experiment of what would happen if real people got superpowers in the real world?

So we actually never came at it from cruel and capricious gods. We actually came at it from a human perspective of, for example, if you had Superman’s power, most likely you would start to disassociate from seeing other people as your equals. If you’re the fastest man alive and you have inevitably, what is a performance-based power, you’re only good as long as you’re the fastest. If you’re second fastest, you’re nobody.

So we live in the tension where the gears grind between the complete, total fucking absurdity of the superhero concept and the reality of our world in human psychology, because those are two very different things. So where those sparks fly is where we find most of our good stuff for the show.

With Butcher getting supe pills, the arrival of Soldier Boy, Homelander is described as broken even in the season trailer. How much is Homelander going to evolve in season three?

You could track the meta-mythology of the series essentially as the slow unraveling of Homelander. So the writers know—and Antony [Starr, who plays Homelander] is a big part of this as well—that, eventually, whenever the series reaches its climax, this guy is going to go full sociopath, and he has to be stopped before some kind of apocalyptic event. That’s what we’re building towards.

So then the question, when you back into that as a writer [is] what are the guardrails that are stopping him from doing that? Who is he, as a person, that he doesn’t just go off and destroy the world today? What are the things that he needs? And then how do we slowly peel those away from him one after the other, after the other?

So he isn’t so much evolving as he’s devolving, I would say. Right now, he still needs love. He still needs the adoration of fans and the approval and love of his son. There are all of these things that he requires that, if he became a true monster, he wouldn’t have. So we’re spending all the seasons teaching him that he doesn’t need those things one after another, after another. And then once he finally realizes he doesn’t want love or approval from anybody, then obviously, that’s when the big end game starts.

How much is Homelander sort of the American ethos for you? I don’t want to put words in your mouth...

Because that could be totally wrong.

So for me, Homelander is more like the walking embodiment of Fox News than what truly represents America, because he presents himself as everybody’s hero and this really strong man, who's like, “I’m the only one who can save you.” And like many cult personalities, he’s exceedingly good at making really complicated issues feel simple and riling people up. And that’s obviously really dangerous.

And if the show has any theme it’s if anyone stands in front of you and says, “I’m the only one that can save you,” do not trust them. They are selling you something, and no one is coming to save you. So we all better figure out how to save each other.

Please tell me he wears a bow tie at some point in season three. That would be incredible.

No, honestly, if anything, Antony sometimes takes issue with me because sometimes I’ll base him so one-to-one on Trump and take snippets of Trump’s speeches and put it in his dialogue and whatever. And Ant, very rightfully, says, “But Homelander’s smarter than Trump, and it’s hard for me to get my motivation around some of the idiocy you’re writing, because Homelander’s more canny and strategic.”

Trump is nothing but childish impulses: “I want this, and I want love, and make sure you respect me, and we should shoot bleach in our bodies.” It’s just unbelievable to me that he has followers. That’s my takeaway.

It seems like you’ve turned some of the disadvantages of a TV show, where action scenes are somewhat limited by budget and scale into a win writing-wise, I’m curious how much you thought about that and how you have used that to the advantage of the story here?

It comes from my network background. We’re a scrappy lot and I had to make, for instance, Supernatural, on a fraction of The Boys' budget, and I learned very early on, you can’t attempt something that you do not have the resources to pull off. You just have to be creative about what you see and don’t see and how does it look visually? Even though I have that sweet, sweet Amazon money to make The Boys, I still have that feeling where I’m always road testing, can we pull that off or not? For making a network show and making this show, the answer is always the same; double down on your characters.

How intentionally have you been referential to the current political and corporate world with The Boys in general, and, as you move forward into season three, are you more or less so?

We very intentionally and consciously talk about what’s going on in the world, and have from the very beginning. Basically, our formula is pretty simple—the writers will come in the morning and we’ll be angry about something that’s happening in the world or some injustice and my answer is always the same: let’s write about it and let’s figure out how to get it into the show satirically, so at least we can feel that we’re not completely helpless in the face of this fucking dystopia that we’re living in. It’s always been that way. It was sort of like in season one, we started thinking, we’re going to take the piss out of superheroes. I would say before we finished writing the first episode, we realized, “Oh, wait, this is about the intersection of celebrity and authoritarianism...”

Nice timing, by the way.

Right? I’ve been waiting my whole career to have that kind of zeitgeist timing. Once we realized we had it and we were defining the exact second we’re living in, we felt like we’d be crazy to not push that as far as it could ultimately go.

When you write on your own, outside the room, what is your private ritual? Do you have any weird idiosyncrasies?

My hours are very, very boring because I come from a Midwestern family in the scrap metal industry where you would go to work at nine and come home at five. So I write those hours. The idiosyncratic thing I do—it's not that crazy, but it really works—is that I never ever rewrite until I reach the end. Obviously, as I’m rereading things, there are a million problems that are occurring to me. I write each and every problem on a note card and put it to the corner of my desk, so I know that it exists and I thought of it. By the end of any script, I have a pile, literally this high, of problems. Then I start going through the problems and I start fixing them one at a time, but I do it as a whole.

That’s the first time I’ve heard that use for index cards. It must be satisfying when that finally...

Ooooh, yeah, dude! Tearing cards is the best! That is the best feeling in the world.

READ ALSO: Kevin Can F**K Himself creator Valerie Armstrong talks about the challenge of writing two shows in one and how she was able to overcome feeling guilty about not writing.
Share