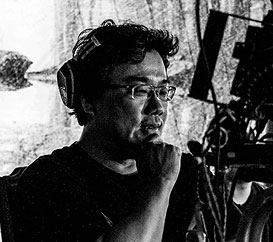 Writing beautiful and sharp dialogue is important, but film isn’t about reading a printed script. It’s about watching the 24 FPS that play on screen and the waves of image and sound.

Korean writer-director Bong Joon Ho’s awards season juggernaut, the dramatic thriller Parasite is, most simply, the tale of those who live above ground and those who live below. From that simple idea it unfurls itself with such complexity and balletic precision that the movie’s historic awards run makes absolute sense; it won a unanimous Palme d’Or at Cannes (the first ever for a Korean filmmaker, up against the likes of Quentin Tarantino’s Once Upon a Time in Hollywood), a Best Motion Picture - Foreign Language Golden Globe and a Best Picture Oscar nod (also first ever for a Korean film) as well as Original Screenplay nods from the Writers Guild, Oscars, and Globes.

Bong is no stranger to praise. He’s established himself as a global filmmaking talent with films like 2008’s horror effort The Host, 2014’s sci-fi tale Snowpiercer, and 2017’s animal rights fable Okja. Parasite, however, is a breakthrough. He co-wrote the less genre-bound script with Jin Won Han based on his own simple idea of an unemployed family of clever grifters that infiltrate a naïvely cushioned rich family through various domestic help jobs. The wealthy Park family lives perched atop a hill in an architecturally-renowned house constructed with smooth, modern lines in concrete and rich wood off set by a giant glass wall in the living room that, like a two-way zoo enclosure, displays an impossibly green, manicured garden outside as well as the immaculately beautiful inhabitants within. The Kim family lives down the hill, amid the urban rabble, in a basement apartment just below street level. In one of Bong’s many brilliant directorial strokes, their home has its own mottled rectangular window—a visual satire of the Park’s expansive glass wall—that periscopes to the outside world at the level of feet, car tires and a recurring drunk who’s grown fond of relieving himself on their section of street. Unlike the cold, seemingly odorless Park home, the Kim’s dwelling is filled with organic life and smells, from a toilet built on a raised platform to get it just above sewer level, to the beef Mrs. Kim sautés with an electric griddle on a table in the living room. At one point in the film, another, even less fortunate basement dweller tells Mr. Kim simply, “Lots of people live underground. It feels like I was born here.”

Bong’s metaphorical play on life above and below ground goes to unexpected places mid-way through with a twist that makes an already engrossing film gripping. Though it’s beautiful and effortlessly funny—with strong elements of both thriller and satire—this film’s narrative is maybe most surprising in how moving it is. It’s a film that, much like the Kim family, insinuates itself into the viewer so utterly, it lives with you well after the screen goes dark.

During the frenzy of awards season, Bong, with the aid of a translator, took time to respond to a series of emailed questions about Parasite for the Writers Guild of America West website. His answers touch on his own brief stint as a tutor, his belief that capitalism is the modern global reality, and how, despite a wild midway twist that culminates in an intricately shocking last act, he did not know the ending of Parasite even as he was writing it.

You’ve said you’re surprised by the U.S. response to Parasite. Do you think the film’s resonance with American audiences says anything about current attitudes in this country toward wealth inequity?

Naturally, a part of the American audiences’ enthusiasm for this film comes from the theme of class disparity and such, but I think it largely comes from the purely cinematic elements of Parasite. A lot of people have commented on how the story was so unpredictable, and so I think the unique and unpredictable narrative is the cinematic force that surprised and pulled in the audience.

How important was it that most viewers will feel more connection with the Kim family than the Park’s? We, the viewers, are also voyeurs looking on the Parks with some envy, no?

There was a time when I considered writing the script from a balanced perspective, but I realized that the audience would be more emotionally involved if they follow the story from the Kim family’s perspective and join their journey of infiltration. Experiencing the surprising plots of the second half of this film together would have more emotional impact. I used this method with Snowpiercer. It wasn’t as if the film showed the front rich cars in the beginning through cross-cutting; the audience was only exposed to what Chris Evans discovered as he advanced forward, so it felt like we were going on this grueling journey with him. The audience identifies with all the struggles he experienced to reach Ed Harris. That limited perspective and focus culminated into the emotional impact, similar to Parasite.

You’ve talked about how this story stems from your own brief experience as a tutor for a wealthy family. When you began finally writing the script, did you know how it would end and then work backward?

I did work as a tutor when I was in university, but those were memories that came back to me while writing the script. My ideas for this story didn’t begin there. At first, I was captivated by this idea of an unemployed family infiltrating a rich house one by one through jobs and the furtive pleasures and fun that come from this sense of infiltration. My tutoring experiences were just fragments that I recalled later on.

Sometimes I do write my scripts with a set ending, and in those cases it feels like I’m writing the story to reach that endpoint. But Parasite was different. Especially for the later parts, I was creating as I was writing, as if I was crossing a river by setting rocks one by one in front of my feet. I had to think about what would happen next at every stage as I was writing.

I love a Korean saying you mentioned in an interview about “drizzle drenches cloth.” You say that you often start your films with some very simple image or personal memory and then let it develop almost on its own in your head, without trying to laden it with heavy themes. Can you explain this balance of not over soaking your ideas.

Similarly, your dialogue is eloquently spare and precise. How much better have you become as a screenwriter seeing the power of this space, or did you always have an understanding of it?

Writing beautiful and sharp dialogue is important, but film isn’t about reading a printed script. It’s about watching the 24 FPS that play on screen and the waves of image and sound. There’s so much nuance that can be portrayed in between the lines, and I think that’s the unique power of cinema. As a writer-director, I always think of image and sound even when I’m writing the script. I may only be typing out words, but I’m already thinking about the image and sound that I’ll create as a director. So naturally, I’m always aware of theses spaces that exist in my dialogue.

Your films are in Korean and are steeped in Korean-ness, yet they are universal. When you write, does this universality just happen naturally, or is it by conscious design?

When I’m screenwriting, I never think about what parts are Korean or universal, or what would appeal to the U.S. audience or German audience. I don’t consider how it will be received and design everything in advance. Dealing with the story itself is not easy, and it’s hectic enough trying to figure out how to perfectly bring together and master all these characters and situations.

You’ve said that this universal appeal comes from the fact that we all live in the same country—the country of capitalism. Can you explain that?

I think generally capitalism and our lives are taking on a similar shape across the world. Thanks to the Internet, several aspects of people’s daily lives are becoming homogenous, particularly in metropolitan areas. It’s a way of life that applies to audiences in various countries all over the world, and the life of the modern-day man in itself is capitalism.

I know you’ve said you prefer writing while traveling or in public, not isolated. I ask all writers this: When, where and how do you write? What is your writing ritual?

I often write my scripts in coffee shops. When I write in my house, office, or an isolated space, I find that I get distracted and try to lie down whenever I get the chance. In Adaptation, you see Nicholas Cage, a screenwriter, lie down on the floor while writing a script because his back hurts. All screenwriters know this struggle, but your back often hurts when you write. And so you end up lying down, and then you get sleep and doze off. So I go around multiple coffee shops, spending an hour or two in each one before moving on to the next one. In between, I get to walk outside, refresh myself, organize my thoughts, and move around a bit. And you can’t lie down to sleep in coffee shops. You have no choice but to focus and work.

READ ALSO: Mike White pulls no punches in Beatriz at Dinner, his profoundly apt tale about a clash between a Mexican immigrant healer and a self-centered billionaire.
Share