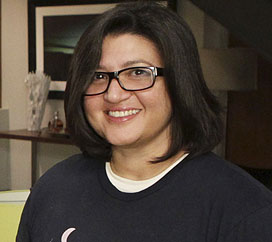 We're excited for the opportunity to show people the family that hasn't been shown on network television in a long, long time. Whether or not people want to call it responsibility, I consider it an opportunity.

When ABC’s Fresh Off the Boat premiered last year, the media lit up with the fact that it was the first network sitcom to feature an Asian family since 1994’s All-American Girl. While this is indeed culturally significant, it’s probably worth noting another quality that makes the show stand out: it’s actually quite funny, as evidenced by the fact that it’s currently in the middle of its second year.

Based very loosely on the memoirs of celebrity chef Eddie Huang, Fresh Off the Boat tells the story of Huangs, a Taiwanese family living in Florida in the ‘90s. It was created by veteran television writer-producer Nahnatchka Khan, whose resume includes American Dad and Malcolm in the Middle. While she respects the responsibility that comes with showrunning a “groundbreaking” show, she’s far more concerned with making a “good” show. “It's always difficult to be the first one of anything, where you’re known as ‘the Asian show,’” she points out. “So hopefully we’re going on a path where, as more and more shows come out featuring different types of families, it's not going to be enough to just say, ‘Oh that's that Asian show.’ It'll be like, ‘Which one?’”

As her name indicates, Khan herself is not Taiwanese, but rather Persian, thus begging the question, “Does she see ‘the Persian show’ happening anytime soon?”

“We might still be a little soon for the Persian sitcom, but it might be coming,” she predicts. “Now that we know that people will watch an Asian sitcom maybe the Persian version is not too far off. We have to still get around the fact that every time you see Iran in the headlines, it's hardly ever good – so we'll have to figure out how to handle that first.”

How do you maintain the satire without lapsing into stereotypes?

It's really just walking the line of what's funny as if you're inhabiting the space, as if you're the characters that you're writing for. You never want your character to become the butt of a joke so you always write from the inside out. At least we try to. It's like this family is not the family in the fish bowl, they're not the ones being pointed at and laughed at. They're looking out into the world, and that's the POV that we use. All the stuff that we satire is through that lens and that really helps us kind of maintain the integrity of these TV characters that we've created.

Do you ever get like a sense of, “Jeez, why do I have permission to speak for this culture?”

It's exciting because I feel like we haven't seen these stories told in this way before, necessarily, on network television. That's why in the '70s when they first started doing The Jeffersons and families you hadn't really seen before, those were all really exciting shows because you got to see it through a different lens. That's kind of what we're doing here, just using like single camera convention. Being able to jump around, jump back and forth, do flashbacks, tell stories in interesting and unique ways but always with that different point of view. That's what's allowing us to feel fresh in a genre that is very staid.

I read a little bit about you talking about the evolution of the characters, which surprised me. Archie Bunker is a bigot, he was always a bigot and that's what made him funny and poignant. How does a sitcom character evolve and yet maintain their “thing” that makes them funny?

It's like in life, where you are who you are at your core, but you also are affected by the experiences that you go through and the people around you. People get changed a little bit as they move through life, even though they maintain the essence of who they are, especially in doing a family show where you have little kids growing up and being shaped in front of your eyes.

With the Eddie character, getting his heart broken, really changes you. You'll never have your first love twice. Those milestones are really fun for us to experiment with and see how they take little pieces of the characters and alter them slightly, but still, it's always going to be Eddie.

So much harder than an action show where you just kill someone or cut their arm off – those are easier changes to track.

Then you always know, like, this person has no left arm.

Exactly. Much easier! I read about your relationship with the real Eddie Huang and that was a bit bumpy for a while. How's that relationship going now?

Eddie will always be involved inasmuch as he wrote the source material. That was the inspiration for the series, and the first material was his memoir, his entire life, so we just took the section of that where his family moves to Orlando in the mid-'90s and made it the jumping off point for the series. But as the show transitioned from one person's memoir to a fictionalized TV family, where you have to expand the world and that's what we've done with these characters.

They are completely fictionalized because we have, hopefully, seven seasons to tell these stories with and watch these characters grow up and do things that their real-life Huangs never did and say things that the real-life Huangs never said. Television is a medium that, once you get into it, couldn't be further from writing a memoir, which is one person's solo story as experienced by that person who's writing it.

With TV, as soon as you cast actors, they bring their own things to the table, thankfully. Then you have a roomful of writers, you have producers, you have set designers, you have directors – it's a collaborative medium and in the best cases it lifts it up, makes it bigger, and evolves it into something greater than what it started out as.

So far, the show's commentary is pretty light. Do you have any intention, now that you've hooked viewers, of digging deeper?

That’s something that we always try to look at in different ways is, as a person of color, you encounter some level of racism every day. Whether it's overt or whether it's subtle or whether you even notice it, but there are things that you experience differently. Now that – knock on wood – people are embracing these characters and wanting to watch them every week and laughing, we definitely are going to pick our moments to come back to that idea.

Even though we may not be focusing on it for these past few episodes, it's always there. And even in subtle ways, like in the “Boy to Man” episode where Eddie gets his heart broken, the white teacher assumes he's this older student's tutor because he's Asian. It's not in a mean-spirited way. It's just a stereotype that this white teacher, meaning no ill will towards Eddie, approaches and brings into the situation. Stuff like that is always informing our stories and our characters. Sometimes they'll be more overt, sometimes they'll be used for comedy, and sometimes they'll be less so.

In a review, The Atlantic suggested that you had a responsibility to make deeper commentary. What would your response to that be?

We're excited for the opportunity to show people the family that hasn't been shown on network television in a long, long time. Whether or not people want to call it responsibility, I consider it an opportunity. You know, there's no quota or box that we have to check. People just want exciting stories with interesting characters behind them. But for us, so many of our stories and characters are infused by that, so it's a natural thing.

Did you find that setting the show back in the '90s was a relief? It seems like shows today struggle so hard to stay relevant with social media. You didn't have to worry about that crap.

Right, exactly. The natural inclination is that it's going to be set in the present day, and we really had to make a case as to why we wanted it to be 20 years ago. Part of the reason is because with all the access that the Internet allows today, you feel less alone in certain ways, and we really wanted our family to feel isolated and have to make it work with the people around them.

We did a whole episode last year about a kid who gets the Sports Illustrated swimsuit issue his big brother orders and that's a huge thing for these boys. It's not like they can go online and Google sexy girls. Stuff like that really helps us – it's pretty fun to be able to go back to that nostalgia factor. And weirdly, '95 being 20 years ago doesn't feel like that long ago. Even with the music, the hip-hop and stuff like that, it doesn't feel retro in a way. You could go downtown right now and Biggie is playing in any bar. The '80s feel like a retro nostalgia, but for some reason mid-'90s hip-hop feels current, in a way.

READ ALSO: The Last Man on Earth’s Will Forte on how to make the end of the world funny
Share