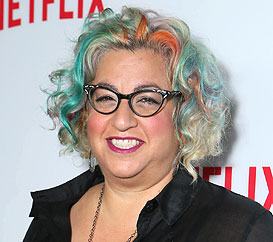 Whether it’s the current TV climate’s endless need for “edge” or something deeper in her own psyche, Jenji Kohan has found a winning rhythm with stories about women on the wrong side of the law. The seven-time Emmy nominee followed her Showtime hit Weeds, about a soccer mom who turns to the pot trade to keep up her cushy lifestyle, with the Writers Guild Award-nommed Netflix original series centered around a crew of felonious females, Orange Is the New Black.

Now wrapping production on its second season, OITNB, which Kohan based loosely on the real-life memoir of Piper Kerman, follows the story of an upper-class Manhattanite, here named Piper Chapman (Taylor Shilling), who is sentenced to prison for transporting a suitcase of drug money a decade earlier for her then-girlfriend Alex, a drug smuggler played by Laura Prepon.

Whatever preconceptions this log line conjures up are probably a mile from where the show lands.

Rather than riding the rich-white-girl-hits-the-slammer gag, Kohan simply uses it as a conceit to enter a world inhabited by a menagerie of characters you don’t see much of on TV. Yes, a few might sound like pat clichés—the butch lesbian Big Boo, for example—but they don’t play out that way. From Crazy Eyes—an almost whimsical blend of lurking female inmate menace and free verse poetry to Sophia Burset, played by real-life transgender actress Laverne Cox, OITNB is all about a diverse ensemble of women in a dark comedy with dramatic strains. And that, according to Kohan, was always the point. The prison simply provides the forum for this eclectic group of characters to interact.

Kohan spoke with the Writers Guild of America West website about OITNB, what affect binge-watching, where people simply devour shows in whole season bites, has had on the writing, and her rules to creating a healthy writers’ room.

You’ve said in several interviews that you used the character of Piper as sort of a Trojan horse to get a show populated by black, lesbian, Hispanic and transgender women made in Hollywood.

You know, I love a true ensemble, and I was really determined to have one. But it’s a hard sell. It’s a big cast, and it’s a diverse cast, and it’s a lot of story so, you know, you start with one and you get in there and you expand.

An attractive white female star is an easier sell.

Yes, in general, yes. And less so attractive white female star than, you know, a solid fish out of water story. You can pitch it in such a way that it’s familiar. It’s Private Benjamin. It’s, you know, something with cultural currency that is familiar to people you’re pitching.

Yeah, there’s not a lot of diverse stuff to point to to say, “It’s like this.” And without your similes it’s a harder sell.

Now that you’re in the second season, what is this show about, at its core, for you?

In TV—particularly cable—readily recognizable stereotypes are often used to get somewhere unexpected. How consciously did you use that approach here?

Well, we never started out and said “Let’s take this stereotype and subvert it.” Again, we’re working from character, and we get to know these people, and if they display stereotypical behavior, it’s because stereotypes are stereotypes because a lot of people act that way. They don’t come out of thin air… a lot of stereotypes are true, a lot are not, and you can’t paint with this wide brush and say, “Everyone black is like this and everyone Latino is like that.” But there are certain cultural memes that people subscribe to… We don’t approach the writing from that macro, “Let’s take a stereotype and twist it.” We look at these people and maybe they sometimes do stereotypical things, but ultimately they’re individuals, so it’s going to be different. It’s going to go off the mark because no one is a stereotype.

When you’re building the characters, to what extent do you have to be conscious of how readily comprehensible they will be at the beginning? You have to hook people into the narrative and take them along, don’t you?

There really are some strong characters. What characters have come out of nowhere or new characters that were surprises?

You know, they all continue to surprise. There were some that were based on a line in the book or a different character in the book whose characteristics or stories we found compelling and then we took off into another direction. Then you get the actors in, and they bring a whole new thing to it. Crazy Eyes became this whole person. Gloria, who was just an ancillary character ended up taking over the kitchen. You follow these lives, and they grow, and you fall in love with these people.

How tightly do you adhere to a season arc? How organic are you? How do you work in terms of letting the show lead you and needing your road map for the season?

We try to make a plan and then if it’s not working, you know, we use that. We come in early in the season before production, and we sit in a room and we talk and we talk and we talk about stories we wanna tell, and we talk about where we think these characters are going and we start throwing stuff on the board and seeing where it leads. By the time people are going off on script, hopefully we know what we’re doing—we know how we’re ending. But as you go along, you juggle and you fix, cause things change and something pops and something fizzles, and you don’t know what you’re gonna get.

The show is unique because of the ensemble—you’ve hit a jackpot with this unique cast. Have these actors led the show even more than you’re used to?

This show is an embarrassment of riches. The actors are incredibly gifted and just make everything soar. But, you know, in the beginning is the word. The script comes first. There are certain people we hear in our heads, and we can write for them better and better every time or they just deliver the shit out of something, and it’s like, “Yeah, more of that.” But it’s on the page first.

This being a Netflix show, has the way people consume the show—often in big, streaming chunks—affected the writing process at all?

It hasn’t affected the writing that much. It’s affected the way people consume it. I said this before, they bathe in it. They become so involved in a way, because they’ve been immersed in a way that is different—that a more spread out episodic show didn’t allow for before.

Do you think these changes in how programming is consumed will change the writing—the way creatives develop shows?

When you write on your own, where and how do you do it? What’s your style?

What’s my style? It depends. I like some noise in the background. Sometimes I like to be in a public place with people around me in coffee houses and libraries. Other times I just have to hole up. I write on airplanes, I write in my office… I’m not that ritualistic about it… just because things have gotten so crazy I’ve had to learn just to do it no matter what the circumstances are.

You’re down with ambient noise or energy.

I love a little background noise.

How do you create a healthy writers’ room—you’ve said before you have a “no asshole” policy. How does that work?

You create a healthy writers’ room by casting it like you’d cast a show and figuring out who would go well together. It’s not foolproof by any means. But you kind of figure out who’s gonna jive. You ask a lot of questions in the interview. You hope for the best. You give people freedom to express themselves. And hopefully the no asshole policy comes in where they feel safe enough to really expose themselves without feeling like they’re gonna get torn down or ridiculed. It’s a writers’ room so occasionally they’re gonna get torn down or ridiculed because it’s the nature of the beast. But you can’t have evil and intentional malice in the room. You have to have a bunch of people who are generally good people and if they have issues and if they have drama they hopefully take it out on themselves and not others.

READ ALSO: Tig Notaro reflects on how her worst year ever led to her becoming the “luckiest unlucky person” and her acclaimed Amazon series One Mississippi.
Share