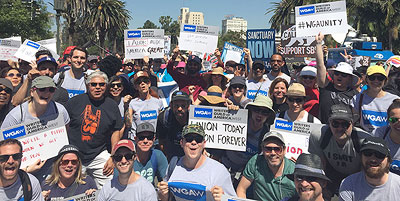 The U.S. Supreme Court’s June decision in Janus v. AFSCME dealt a significant blow to public sector unions, effectively requiring them to provide the benefits of union representation to non-members for free. After this decision, public sector unions are prohibited from charging those who don’t want to join the union “agency” or “fair share fees” for services the union provides. While this decision doesn’t apply to private sector unions like the WGAW, it is another disturbing example of the concerted effort by conservative court majority to erode the power of unions.

We are fighting back by supporting the Workplace Democracy Act, introduced by Sen. Bernie Sanders (I-VT) and Rep. Mark Pocan (D-WI). This legislation would strengthen federal laws designed to protect workers, make it easier to organize a union through a voluntary recognition, eliminate laws that allow workers to enjoy the protections of a union without paying their fair share, put pressure on employers to negotiate a first contract and stop employers from misclassifying workers in order to deny them pay, benefits or the right to organize.