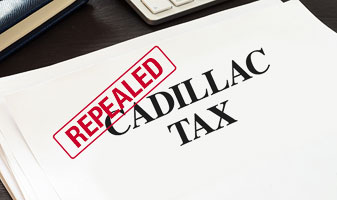 Employer-provided health insurance accounts for the single largest share of the insured population today, and for decades WGAW has supported efforts to control skyrocketing health care costs while opposing misguided attempts to unfairly tax health care plans. The source of high costs in the health care system is a lack of competition among health care suppliers and an absence of price regulation, and not individuals’ insulation from the cost of health care.

WGAW consistently opposed the Affordable Care Act’s 40% excise tax on employer-sponsored health plans, dubbed the “Cadillac Tax” because it targeted high-quality, comprehensive plans. WGAW advocated for the tax’s repeal for several years, lobbying legislators in meetings and letters to repeal the tax and highlighting the importance of the issue with candidates in person and through the WGAW PAC’s candidate questionnaire.

The “Cadillac Tax” was permanently repealed on December 20, 2019.

WHAT IS THE “CADILLAC TAX” AND WHY DID THE WGAW OPPOSE IT?

Overview of the Cadillac Tax

Why We Opposed the Cadillac Tax

As premiums and out-of-pocket costs have risen sharply in recent years, opposition to the Cadillac Tax surged, and it was strongly opposed by the labor unions nationwide.