With the FCC set to gut its own rules for the Open Internet, the WGAW is ready to fight back. 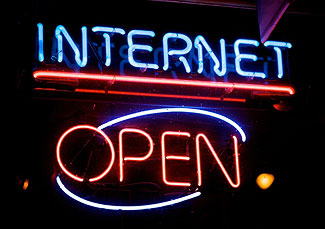 Just when you thought the battle for the Open Internet had been won, along comes a new administration determined to hand control of the Internet over to a few corporate gatekeepers. The stakes are just as high now as they were in the last go-around and writers will once again be called into action.

In July 2009, the WGAW filed its first comments in support of Open Internet rules at the Federal Communications Commission (FCC). Our support was influenced by the 2007-2008 strike, which not only netted writers jurisdiction of the Internet but also demonstrated the communication potential of this platform. Writers used the Internet during the strike to inform the public and build support. Locked in a struggle with the major media companies that controlled all traditional media platforms, the Open Internet was critical to our cause.

The strike also laid bare the immense power amassed by the six biggest media companies (CBS, Disney, Fox, NBCU, Time Warner, Viacom) as the result of decades of industry consolidation. With a shrinking pool of companies to sell to, the major companies that dominated the industry and bargained as one were harming the creative and economic well-being of writers. It was therefore imperative that the Guild find a way to reintroduce competition in the video market.

In 2009, the notion that the Internet could become a major platform for original video content was largely theoretical. In the Guild’s 2009 filing, we could only point to Joss Whedon’s and Seth MacFarlane’s short-form online video projects as examples of the Internet’s potential for original video programming. But we suspected that with lower entry barriers and the opportunity to experiment with content and deliver it directly to consumers who could watch it when and how they chose, Internet video could take off. And of equal importance, we also understood that the growth of an online video market would constitute a competitive threat to the traditional media programmers and distributors, who would have the muscle to foreclose on this new competition unless federal regulations were put in place to check their power. Hence, the need for rules protecting the Open Internet.

Between then and now, the fight for the Open Internet has been waged across two FCC proceedings and three court cases. It has happened against the backdrop of a rapidly growing online video market – which has undeniably challenged the traditional media landscape that is still so tightly controlled by the big six companies and their cable distribution partners. As the Guild reported during our recent contract campaign, industry analyst SNL estimates that Netflix, Amazon and Hulu spent almost $9 billion licensing and producing content in 2016. WGA members wrote on 70 online television series in 2016 and we expect upwards of 100 Guild-covered series to be released online this year. All of this new competition is the result of the Open Internet, so it should come as no surprise that it’s most vociferous opponents are cable and Internet service providers.

After the DC Circuit Court twice threw out the FCC’s attempts to write Open Internet rules, the Commission finally got it right. In 2015, the FCC reclassified wired and wireless broadband Internet access services as Title II telecommunication service, giving it the strongest legal authority to institute rules that banned blocking, throttling, paid prioritization and discriminatory conduct generally. The Guild, along with four million consumers, strongly supported this move. The campaign for these rules featured unprecedented participation by Guild members: over 1,000 members sent comments to the FCC, and more than 200 showrunners and series creators signed a letter urging the FCC to reclassify broadband Internet services. The Guild’s FCC filings featured stories from Guild members about how they had benefitted from an Open Internet, making the importance of this fight for content creators both personal and concrete. In recognition of the Guild’s work, member Veena Sud was one of the three speakers invited to appear before the FCC on the day the Commission voted to adopt the rules. And in 2016, the DC Circuit Court finally upheld the FCC’s Open Internet rules.

Unfortunately, the story does not end there. The 2016 election ushered in a Republican Chairman of the FCC who wants nothing more than to repeal the Open Internet rules. So, in July of 2017, we will once again file comments with the FCC, this time defending the existing rules. This fight will require the activism of millions of Americans – including writers. In the coming weeks and months the Guild will be actively defending Open Internet rules. If you are interested in becoming involved in this campaign, please contact the Guild’s Political Director Corrina Freedman. #RESIST.